Have you ever wondered what went behind the mind of a human being in the creation and installation of doors in buildings? Me neither. Seems obvious doesn't it. That where there should be a place, building or a boundary, there should be a door. 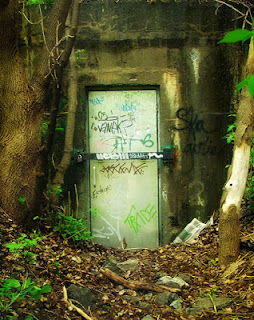 But lets think about this, what created the need for such a thing? I will tell you a story ...

In the beginning of times when humans were scarce and small in number. They never really cared about doors or windows. They were happy living in their caves and trees. Sometimes they had to scare off animals and had to light fires outside to keep animals at bay. Then as the time passed on humans started covering up their entrences with wooden or stone slabs at nights to protect themselves in a better manner from threats.

Lets shed some more light on the word threat.


A statement of an intention to inflict pain, injury, damage, or other hostile action on someone in retribution for something done or not...: "the family has received death threats"

A menace of bodily harm, such as may restrain a person's freedom of action.

So if a door was introduced to keep foriegn threats outside, to avoid unwanted guests, others from taking over one's place then doors can be considered as symbols of 'avoidance and mistrust'.

Further since humans do allow some individuals close to them inside the doors from time to time and others whom with time they come to know better shows that even though humans are social animals still they need to categorize themselves in social circles and can't let everybody join that circle instantaneously.

That is the reason why humans like to emphasize so much on territories and boundaries.

Thinking on a wider scale, doors show that we as people never really can live together and would rather stay apart unless there are some common interests that serve us in living together.

How often do people share their inner most secrets with others? Hardly ever. Even if there is a friend or a lover with whom they share everything still there are certain thoughts and conjectures that stay inside never to see the surface and be heard of ever. There is a partition that we like to create of our thoughts and ideas within ourselves hidden from the world. Unless there is a need to share them, in a more reformed manner, in a way we deem suitable or in a manner we see fit to the world or that will not have any adverse affect on us. That is, if someone is in a reasonable frame of mindset.

Doors are just an extension of the human state of feeling insecure and finding ways to secure themselves from any foriegn threats. Physical or psychological. Humans are never really at ease unless they know they are secure and warm.

But isn't that just obvious?